Ari Parata is the brother of Tane Parata and uncle of Nikau Parata. He is portrayed by Rob Kipa-Williams.

Before moving to Summer Bay, Ari considered himself the protector of the Parata family having been involved with some dangerous activity.

After injuring himself working on a construction site, Ari is taken to the local hospital. While awaiting treatment, the hospital is locked down as a violent siege takes place. Ari comforts Marilyn Chambers while she suffers from a panic attack. 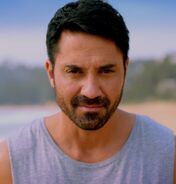 Add a photo to this gallery

Retrieved from "https://homeandaway.fandom.com/wiki/Ari_Parata?oldid=17773"
Community content is available under CC-BY-SA unless otherwise noted.