Ava Gilbert-Lee is the daughter of Justin Morgan and Nina Gilbert. She's the niece of Tori Morgan, Brody Morgan, Mason Morgan and Raffy Morrison. She's also the granddaughter of Justin's deceased parents, Koby and Kate Lee. She lives in a house in the city with her mother.

Ava was born to Jack Lee (Justin) and Nina Gilbert, when her parents were in a relationship. But when Justin and his family were in danger, they went under witness protection and Justin had no choice, but to leave Nina to raise their daughter on her own. In order to keep Ava safe, Justin had leave Ava until the witness protection is over. Justin and his siblings moved out and move to Summer Bay. Ava hasn't seen her father in seven years. But during under protection, Justin kept an old video of him playing with baby Ava.

While Ava is walking home from school with her friend, she notices Justin leaving his cap behind on a bench and returns it to him. Justin realises that she is his daughter when she enters Nina's house. Weeks later, Ava turns up at Justin's house, having left the city on a bus. She asks Justin if he is her father and he confirms that he is.

Ava bonds with Justin's fiancée Phoebe Nicholson and his sister Raffy Morrison. Ava was later seen playing at the beach with Justin and Raffy. Ava's step-father Brian Gilbert comes to collect her and gets into an argument with Justin, causing her to run off. Phoebe ran after her. Ava is struck by Patrick Stanwood's car. Brian later allows Justin to spend time with Ava. When Nina and Brian go away for a few days, Ava comes to stay with Justin and bonds with Scarlett Snow.

A year later, Nina takes Ava to the bay to visit Justin and meets Justin's new girlfriend, Willow Harris, who was unaware that Justin has a daughter.

Willow struggles to get along with Ava. One day, Ava meets a woman named Hazel Easton, who tells her that she's a friend of Justin and that he's working late and brings her to her house. Ava soon discovers that she's been kidnapped by Hazel and her son, Boyd Easton. Ava was saved by Willow, who gives him money. Boyd lets Ava go, but captures Willow. Nina was angry at Justin for putting Ava in danger and tells him that she's going to let him see Ava again.

A year later, Ava was allowed to see Justin again and Justin came to the city to pick her up and take her to the bay. Ava meets Justin's new girlfriend, Leah Patterson-Baker, but takes an instant dislike towards her. Ava refuse any offers from Leah, even fed Leah's quiche to Buddy. Ava tells Leah that Justin's past relationships with Phoebe, Scarlett and Willow ever last and knows that Justin won't last with her.

The next day, Leah allows Ava to do some tie-dye and provided white shirts. Justin allows Ava to grab Tori's white pillow cases so they could tie-dye it, and Ava goes to grab them. But when she came back, she walks in on Justin and Leah kissing and Ava snapped.

Justin asked her why she doesn't like Leah, but Ava refuse to tell the truth. Justin realises that Ava is jealous and tells her that she's more important to him, but Ava tells him that Leah is, not her. Justin tells Ava that he loves her, but she refuses to believe that, and wants to go back home to Nina. Ava continues clashing with Justin and Leah until one night, Ava told Justin the real reason why she's acted out.

Ava revealed that Brian and Nina has been arguing and Brian moved out a week ago, leaving Nina and Ava devastated. The next day, Ava gets along with Leah and Justin tells her not to worry anymore. Ava bonds with Leah over a soccer match with Justin.

Ava has dark brown hair, brown eyes and has a skinny figure. When she got older, her hair was much lighter and is has gotten taller and a bit bigger. 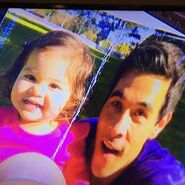 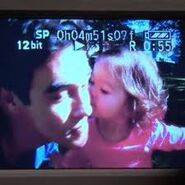 Video of young Ava and Justin

Add a photo to this gallery
Retrieved from "https://homeandaway.fandom.com/wiki/Ava_Gilbert?oldid=17499"
Community content is available under CC-BY-SA unless otherwise noted.